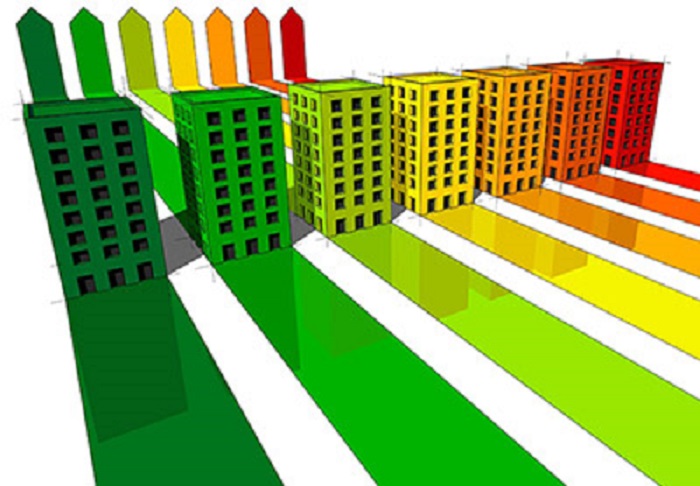 The European Union introduced the Energy Performance of Buildings Directive (EPBD) in 2003. The UK Government followed with the Energy Performance of Buildings (Certificates and Inspections) Regulation in 2007. Commercial and public sector buildings contribute over 20% of the UK’s carbon footprint. The introduction of Display Energy Certificates (DECs) for public buildings is part of a series of legislation to dramatically improve the energy efficiency of the UK’s building stock, both new and existing. Whilst the requirement is only for public buildings, many commercial properties have DECs completed voluntarily to demonstrate their energy performance over time.

A DEC shows the energy performance of a building based on actual energy consumption. The rating is an indicator of the annual CO2 emissions from operating the building. This rating is shown on a scale from A to G, where A is the lowest CO2 emissions and represents the best performing buildings. Also shown on the certificate are the ratings for the previous two years which provides information on whether the energy performance of the building is improving. The rating is based on the amount of energy consumed over a period of 12 months and is taken from meter readings.

The DEC must be updated annually with the previous 12 month’s energy data reflected. The first DEC is accompanied by an Advisory Report which highlights basic recommendations to improve the energy performance such as improvements to the building fabric and its services. The Advisory Report is valid for seven years.

It is the legal responsibility of the occupier of the building to comply with the Regulations. The occupier must display a valid DEC in a place that is clearly visible to the public. A DEC is required for all buildings with a gross internal floor area of over 1,000 sq m that are occupied in whole or part by public services and visited by the public.

The Regulations require that all DECs are lodged on the UK Government’s Landmark database where they can be freely inspected by the general public. This public accountability is designed to encourage building occupiers to improve the energy efficiency of their buildings.

DECs differ fundamentally from EPCs. A DEC is a far more powerful tool than an EPC for improving year-on-year energy efficiency. An EPC is a estimated energy performance rating and assumes that the building will be properly operated whereas a DEC shows the actual energy performance based on real data. It therefore follows that a DEC can only be produced for occupied buildings where energy is being used.